Home
Reviews and Guide
Does It Hurt To Crop A Dogs Ears? The Pros and Cons of Crop 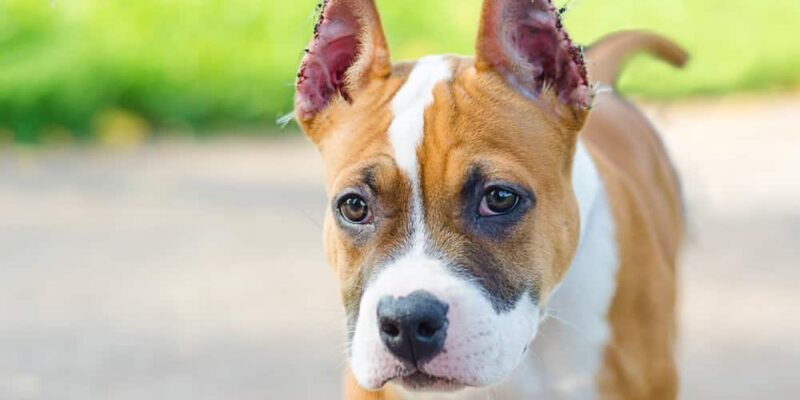 Ear cropping is a surgery that is commonly performed on dogs.

The procedure cuts the ear flap and leaves the dog with a permanent “D” shape.

The reasonings behind this surgery are varied, but many people believe that it results in a cleaner look and can help prevent infections.

It is often done for cosmetic reasons, but there are also health benefits to cropping a dog’s ears.

While the surgery is not particularly dangerous, there are some risks involved. But does it hurt to crop a dogs ears? And what are the benefits of cropping a dog’s ears?

This blog post will answer those questions and more. Stay tuned for information about the crops ear procedure, potential risks, and aftercare.

So, if you are considering having your dog’s ears cropped, it is important to weigh the pros and cons and make an informed decision.

What Is Cropping And Why Is It Done?

The technical term for cropping a dog’s ears is “otoplasty.”

During this procedure, the lower portion of the ear flap is removed and the remaining skin is stitched together to form a new ear shape.

In most cases, it leaves a part of the original ear as well as an upper half that looks like a bat’s ear.

The main reason for the procedure is to create a longer, pointier ear flap that stands upright.

This shape is more appealing to some pet owners, who are looking for a certain type of appearance.

The ear crops are also done to allow the ears to stand up and regulate their shape. This can prevent infections that are more common when the ear flap is hanging, rather than standing upright.

That said, there are some other potential reasons to crop a dog’s ears.

Some people think that it will help prevent ear infections, as the standing flap can dry out better than hanging ones.

Dogs with floppy ears are more likely to get ear infections, so cropping can help prevent these. It is also thought that it might make the dog look intimidating or appear more like the breed standard (this one is controversial).

Some show organizations require cropped ears, but these breeds are rare and not very popular.

Finally, there are some health benefits to cropping a dog’s ears. In particular, some dogs get infections of the ear canal if their ear flap is droopy instead of standing up.

Cropping the ears can help reduce these issues and prevent future problems from cropping up.

Does It Hurt To Crop A Dogs Ears? How To Safely Do It!

Although it is a little different for every dog, the general procedure to crop a dog’s ears does not hurt.

The puppy will be put under anesthesia, which will make them feel no pain. Once the ears are “tucked” and stitched, they will not be able to feel the new shape.

The two most common methods for cropping a dog’s ears are by using either a scalpel or an elastrator.

It can be done by a vet or by someone with anesthesia and very sharp equipment.

The scalpel method uses a surgical blade that is heated to near boiling point.

This method can cause pain, especially if the dog’s skin is not properly numbed.

However, generally, the scalpel method does not hurt very much because it causes less trauma than the elastrator method.

This method uses a special band, called an elastrator, that immediately causes local trauma to the skin.

It causes more pain because it cuts deeper into the skin and leaves a larger cut.

The elastrator method for cropping does not usually hurt as much as chemical or banding methods, but it is still considered fairly painful (more so than scalpel).

Furthermore, there can be some risks related to elastrator method, including infections and nerve damage.

What Is The Procedure For Cropping A Dog’s Ears?

The procedure for cropping a dog’s ears is done by clipping the cartilage around the ear canal.

This will leave two flaps of skin that are used to cover up the cartilage. These are then sutured, or stitched shut.

Most dogs are put under anaesthesia during this procedure to make sure they are properly asleep and don’t hurt themselves in their sleep.

How To Care For Cropped Ears?

After the dog’s ears have been cropped, you will need to take care of them for about a month. Here are some general guidelines:

What Are The Benefits Of Cropping A Dog’s Ears?

There are some benefits to cropping a dog’s ears, including

Firstly, it can make a dog look better by giving them more symmetrical ears. This may or may not be something that you like, but it can be a draw for some people.

A dog with erect ears is more likely to get ear infections than a dog whose ears are cropped.

This is because the floppy shape of an uncropped ear creates a warm, damp environment where bacteria and fungi love to grow.

Ears that lay closer to the head also will not collect as much debris and dirt as those on dogs with natural hanging ears.

Furthermore, if your dog is involved in a fight or accident where their ears get caught on something, cropping may help prevent them from being torn.

However, there are other ways to prevent this such as using dog apparel like a protective coat.

there are also potential health benefits from cropping a dog’s ears such as less risk of tumors or cancer arising in the ear canal over time.

However, this risk is reduced with all dogs regardless of whether their ears are or not.

Of course, the benefits of ear cropping can also be achieved through non-surgical methods.

You can do this by training your dog to keep their ears up and clean them regularly.

This would likely require more effort and money than cropping, but it may be a better option in the long run.

The pain of the surgery is generally not so bad for dogs because they are usually given anesthesia.

However, it may be more painful than you expect because many dogs get ear infections afterward (more on that below).

Using an elastrator method to crop a dog’s ears can cause even more pain than the scalpel method because it cuts deeper into the skin.

As with any operation, there is always a risk of infection during and after surgery.

This can be reduced by carefully monitoring the dog’s wounds and cleaning them appropriately.

The ear crop itself should heal without complication, but having an infection afterward can still cause problems.

Nerve damage can occur if an elastrator or chemical band is used to crop a dog’s ears and it cuts too deep into the skin.

If the nerves in the ear canal are seriously damaged, this could be permanent and may even cause deafness.

Cropping a dog’s ears can potentially lead to other issues, such as a dog being more prone to ear infections.

It may cause the ears to hang differently on the side of the dog’s head and hanging too low can be a problem indoors.

Of course, these risks are reduced when done by a professional with anesthesia. However, you should always consult with your vet to decide if it is the right choice for your pet.

Are There Any Alternatives To Cropping Your Dog’s Ears?

Yes. There are non-surgical alternatives for cropping your dog’s ears that can yield the same benefits as surgery.

Here are some of them:

A dog’s ears can be cropped with surgery, but they can also be trimmed.

You can either cut the hair around the ears or even use small scissors to trim the excess skin on the edge of the external ear canal.

This will leave your dog with ears that are smaller, cuter, and less likely to get ear infections.

Dog ear pads are a great way to keep your dog’s ears clean and prevent injury.

They can be left on all the time or just for special occasions. They can help keep your dog’s long floppy ears from dragging on the ground and picking up dirt, debris, and more.

This is a great alternative to cropping, which you cannot do on dogs with hanging ears.

If your dog’s ears are only floppy because they have a lot of hair in them, you can use dog ear clips or dog-ear cuffs to keep them up.

These are adorable and they will help prevent your dog from getting ear infections by keeping the skin on the ear canal up and dry.

Dog ear muffs are a great alternative for dogs with floppy ears that spend a lot of time in the snow.

They attach to your dog’s head and prevent their ears from getting wet, which is uncomfortable and can lead to ear infections.

The best way to train a floppy-eared dog to hold up their ears is by using ear tubes.

These look somewhat like human earplugs and they are inserted into the ear canal.

They do not cause any pain, but they keep your dog’s ears from folding over and help them hold their natural shape naturally.

Finally, another alternative is to use dog apparel or a protective coat for your dog’s ears.

This would not only protect the cartilage of their ears from damage, but it would also keep them cleaner and warmer in cold weather.

This is a great way to give your dog cute and clean ears without having to put them under anesthesia.

However, you have to remember that ear cropping is cosmetic surgery.

There really isn’t anything wrong with deciding against it if you don’t feel comfortable with putting your pet under anesthesia, or if you don’t want to spend the money on it.

Ear cropping is not an essential dog surgery, but it does have benefits for dogs that get ear infections or get their ears injured. However, you can also achieve the same benefits through non-surgical methods.

I hope that now it’s clear that does it hurt to crop a dog’s ears.

If you found this article helpful, please share it with your friends, and don’t forget to comment below in case of any questions or suggestions.

Does it hurt puppies to crop their ears?

No, it does not hurt puppies to crop their ears.

The pain that the puppy feels during ear cropping is minimal at worst. The pain is vastly inferior to the pain felt during ear infections, which are common in dogs with uncropped ears.

It’s a lot like getting a vaccination at the doctor’s office. The pain from the ear crop is short-lived and well worth it for the future benefits it provides.

Do dogs feel pain after getting ears cropped?

Yes, Dogs are likely to feel some pain after the anesthesia wears off, but they do not feel any pain during the procedure itself.

This is a very common procedure and the pain should be minimal.

If your dog does feel a lot of pain after ear cropping surgery, it could be because something was done incorrectly or they are in pain due to an allergy.

No, ear cropping is not cruel. The procedure is performed with the same attitude as spaying/neutering your pet, which is done with the primary goal of preventing injuries or death by dog fights or road accidents.

They are both performed to remove a threat in order to help the animal in its protection.

A cropped puppy’s ear is actually more alike to that of an adult dog than when the ear is left to its natural shape.

When properly performed by a trained veterinarian, ear cropping should not cause pain or discomfort to the animal. 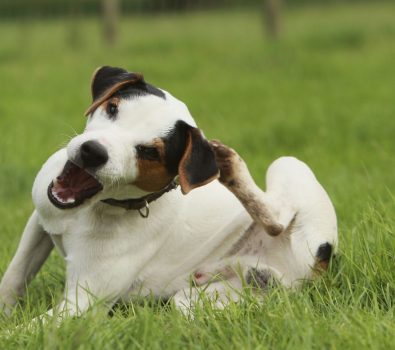